Year 10 and 11 Students at Plymouth School of Creative Arts strutted their stuff in Fashions like you’ve never worn them before on Tuesday night at the Red House.

Julie Carson, managing director of TEC Packaging in Plymouth set the textiles students of PSCA a massive challenge: Create a range of wearable fashions using only their eco-friendly packaging materials. Bubble wrap, gaffer tape, bin bags and cling film?! The year 10 students began designing in September and their experimental work culminated in a big event fashion show called “Unwrapped”. It was opened by the London fashion designer, Alice Vandy and attended by the Lord Mayor, then got off to a cracking start with live music from Armogan, Gable Ends and Dimtry Babichev.

What seemed a daunting task at the outset has become more and more experimental and exciting as the term has proceeded, according to their Textiles teacher, Ali Goodworth. She says she has seen their enthusiasm and engagement grow, week on week as the final show got closer. Their excitement spread and they were later joined by 2 extracurricular students from year 11.  She said, “ I am so proud of how they have stepped up to meet this challenge. Their imagination is boundless and has outstripped mine my miles.”

The judging took place at the end of the show and the Lord Mayor joked about needing to have a weighted system as his points should definitely not carry the same value as that of Alice Vandy. First place went to budding designer, Nieve Westlake for her outstanding and sophisticated design, constructed entirely of gaffer tape and plastic bags, though to see it, one would find it hard to believe. Second and third places went to Annabel Somerfield and Louie Malik for their ingenious creations.

One audience member wrote an email afterwards to say, “The focus upon plastics and the its impact on the environment was both thought-provoking and enjoyable. The organisation was meticulous, the students’ work and collaborative participation (on the catwalk, serving snacks and behind the scenes) was inspiring.”

In all “Unwrapped” was a hugely collaborative affair, supported by our partners, Plymouth College of Art and Next Steps South West, many staff members and many many students. Everyone worked together beautifully to showcase how truly inspired and inspiring our students can be.

The year 10 students at Plymouth School of Creative Arts who are aged 14 and 15 years old, are studying for a level 2 diploma in Textiles from University Arts London. 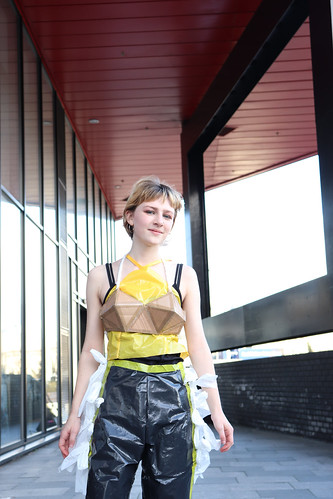