Over the weekend of May 10th-12th the 1st ever PSCA Ten Tors team, undertook the Ten Tors Challenge on Dartmoor – finishing their 35 mile route just after midday on the Sunday.

Ethan, Rowan, Oscar, Finn, Sachin and their Team Leader Alicia left school at 9.20 on Friday – cheered off by the reception class to head to Okehampton Camp to register; complete equipment checks; fire up the GPS tracker; undertake a full safety briefing from the Army and to plan their route for the Challenge.  With over 2400 participants this year, focus was ensuring the teams were ready, prepared and safe to head on to the moors.

Year 9 PSCA student Jack also set off on the 35 Mile Route with his scout group! 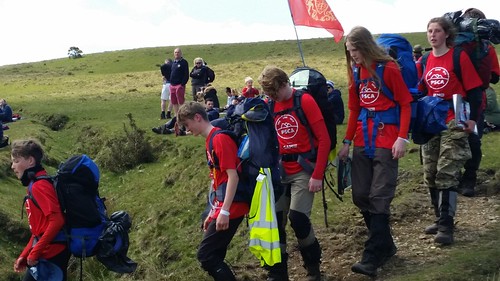 With 8 months training in all forms of weather behind them, the PSCA team got up on Saturday morning at 5am to a glorious sunrise – had a hearty breakfast and headed to the start line.  With a splendid parachute display at 6.45am and the Army helicopters ferrying personnel and supplies – they all got ready for the off. At 7am exactly, the cannons fired, and the Challenge began.

Checking their progress throughout the day, it was clear the team were maintaining a great pace, as they reached Tor after Tor – with their timings being sent back to the Okehampton Base Camp.  Whilst the plan had been to reach Little Mis Tor (Tor 6) for the evening – the PSCA Team had reached this by 5pm and carried on to both White Barrow and then Standon Farm (Tor 7) for 8pm.

After pitching tents and cooking dinner, a good(ish) night was spent on the moors, before getting up at 4am on the Sunday morning to get ready for a 6am start.  The final 3 Tors were taken at a steady and solid pace throughout the morning – meaning Base Camp had to contact all parents telling them to get to Okehampton Camp for the finish earlier than planned as the team was doing so well.

At just after 12.30am, resplendent in their red PSCA T-Shirts, the team came over the final hill and into sight.  Jack and his scout team also completed the walk! To the sound of great cheers and clapping all round, they made their way up to the finish line, to receive their medals on the podium – followed by champagne and of course – the Ten Tors Pasty.

A fantastic achievement by all – well done team – you absolutely smashed it!!

Here’s to next year..