Ethan, William , Joao and Jack (alas, no Evie, she was missed) trekked to London to represent the rest of PhotoMedia at the Shine School Media Awards.  It was an early start, big smiles, sharp outfits (Joao can do dress code beautifully) and cracking haircuts (Jack had the TiNT logo shaved into his hair). The students selected to go to the awards worked super hard not only on their own work, but stayed super late to help others complete their pieces and bring the whole project together, without them we really wouldn’t have had an entry. The journey was fairly uneventful until the train got packed out by people leaving Glastonbury, there were some spectacular sights.

So, what are these awards?  Well, the Shine Media Awards is a biggie – the Worshipful Company of Stationers and Newspaper Makers (they established Copyright law 600yrs ago) run Shine to encourage students into journalism and the print industry.  It is sponsored by huge companies such as Getty, Hearst, TES, The Daily Mail and The Telegraph to name a few, recognition here could really kick start a career. 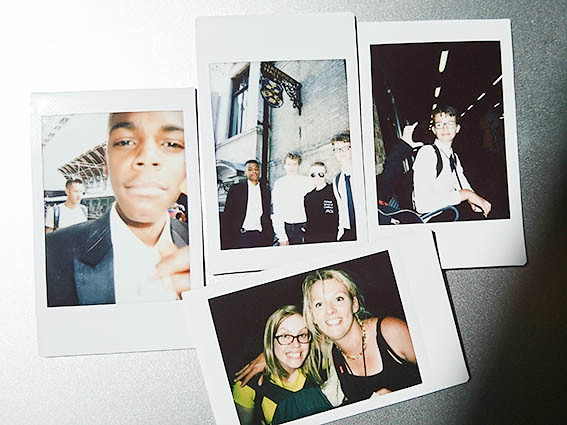 PhotoMedia were hard at work during the spring term putting together issue three of TiNT magazine.  This issue was all about social justice and students got their teeth into all sorts of subjects that meant something to them and their local community – we even took it to Tate Exchange.  We had progressed through two rounds of judging to get to final at Stationers Hall (super posh) and we were eager to find out what categories we had been nominated for. The programme showed we were in for Best Design and Layout and Best Community and Environmental Initiative and up against Ibstock Place School, Kingsbridge CC, Osborne School, St Joseph’s College, Drapers’ Academy, Ermysted’s Grammar School and Kings High School.  The standard this year was very high and I must admit, I was a bit nervous.

Ethan who co-designed the website was very impressed with London: “As a first timer in London this has been the best time of my life so far. London was huge and so was Stationers Hall. I think I want to do this again”

We got to the awards and joined in with the workshops.  We had a good chat to one of the advertising managers at Hearst.  She had some good pointers to help us improve our web presence and engage a wider audience.  We had a bit of time with Steve Marchant from the Cartoon Museum – he did a wonderful caricature of Jack and then it was time for the Keynotes.  We had some galvanising words from Bryony Gordon, she spoke about the importance of not wanting to be anyone else but yourself and how accepting herself and the challenges she was facing with her mental health had sparked a huge turn in her journalism and career.  Lunch followed (chicken and couscous) and then we began. What would we win, if anything? The competition was fierce.

We came second to Kingsbridge Community College alongside Ibstock Place School in Best Community and Environmental Initiative – their publication was stunning and a worthy winner.  We also came second to Ermysted’s Grammar School alongside Kings High School in Best Design and Layout. We sat back content and watched the rest of the awards and took note of the winners publications and judges feedback.

We got to the end of the programme and then the Harrison Cup was announced – this one is the judges choice and they make their own rules and criteria.  This one was presented by The Master of The Stationers’ Company. To our utter astonishment, Joao’s name was called! He had jointly won the cup alongside another student from The Marlborough Science academy (unfortunately this student wasn’t there to go up and get his award).  Joao went to the stage to collect a solid silver trophy with his name engraved alongside previous winners, a crystal trophy for him to keep and £500 for the school! We were dumfounded. What an achievement!

Photojournalist Joao who won the Harrison Cup said “In a split second my name got called out and I was shocked and confused but pretty excited at the same time. I collected the Trophy, £500 and a crystal with my name engraved into it. It was extremely exciting!”

Jack, Website Co-Editor, said: “It felt amazing to win all the awards we won. I am so happy that I got to go to London”

Here’s to doing it bigger, better and bolder next year.  This competition really is a cornerstone of our Photography and Media courses and a highlight of our academic year.  To be competing alongside some of the most prestigious schools in the country and winning really goes to show if you believe you can do something and you put the effort in, anything is possible.  We’d love more students to get involved next year – we need writers, illustrators, podcasters, people with a nose for a story – send them all our way.
Cass Bisco PhotoMedia Lead