Year 7 students recently showed off their rocket cars in the National Event ‘Race For The Line’.

“Students were invited to manufacture their own racing cars using materials supplied and to certain specifications, thinking about the effects that aerodynamics, friction and weight would have on the cars.” Royal Marine Reserve and PSCA staff member Sasha.

Students spent several weeks making these within Design Inquiry which is a project based session combining the subjects of Science and Design Technology.

During those several weeks the students had to to design the car, build the car and paint the car. Students had 200 minutes to create these cars. On the big day students finally got to race them using real rockets!

“Small rocket motors were placed into the cars to propel them up to 35 miles per hours across the playground.”

The rockets were brought from the Royal Navy who came to the school to help the students race the cars. Most of the cars were successful but some didn’t survive the experience. The cars that were unsuccessful got ripped in half or had rocket failure.

Some photos of the event: 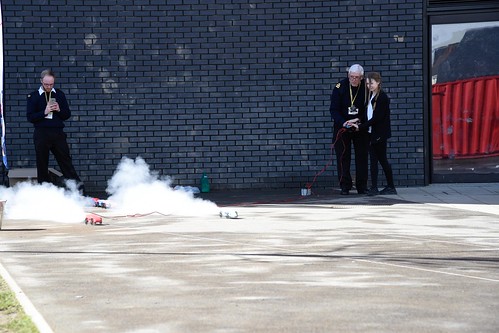 Ellis and Willow interview staff and students involved in this short radio piece: