On Sunday, four members of the PSCA Mountain Bike Club were at Gawton, a downhill mountain biking trail centre, near Tavistock, for the first of the Woodland Riders Winter Series races. For three of the group, this was the first time they had ever raced. We had been training since the start of last month, so the riders were prepared for what was to come, but the races always throw up a surprise or two. 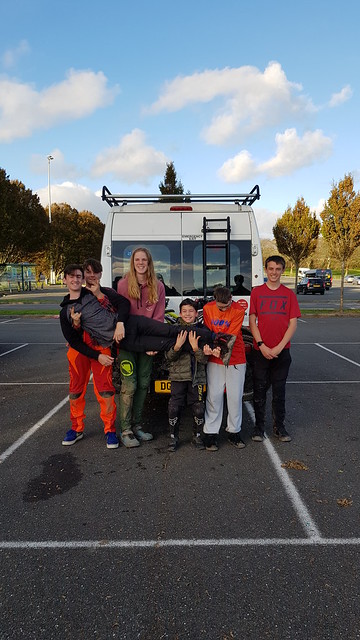 For Sachin, Harris, AJ, and Archer, this was evident from the start of their track walk, when they discovered that certain lines they had practiced were taped off! The lads coped very well though, with only one crash in all of their three practice runs, so by the lunch break, they were all prepared for the afternoon’s timed race runs. With food consumed, family and friends in-situ trackside, and all last-minute preparations made, the four riders made their way to the start ramp.

With a final countdown from five, they each individually headed out for the first of their timed runs. Harris suffered an unfortunate mechanical issue, but all four riders made it safely to the bottom of the course. Time for another quick refuel (apparently, teenage boys on bikes can’t ever eat too much!) and for Harris to get his bike fixed (thanks Chris!), then back to the start ramps for the second of the timed runs.
Again, all four lads made it to the bottom unscathed, but the surprise of the day was Archer, who took almost 20 seconds off his first time! At the start of the day, Rob and Chris (the two trip leaders) had decided that finishing in one piece and not last would be a marker for success, so they were elated that all four riders achieved this.

All-in-all, this was an epic day of racing, made all the more enjoyable by the droves of family and friends who turned up to watch and cheer. These four lads have laid down a solid marker, which should also prove to be an excellent base for development in future races. Look out for more success stories through the winter to come.

To get involved in the MTB Club, either as a volunteer or as a rider, please contact Chris via the School main reception.